– Ten new broadcasters welcomed to the all-Canadian broadcast –
– The historic event now begins at 6:30 p.m. across all markets / 7 p.m. NT on Sunday on 120 platforms – 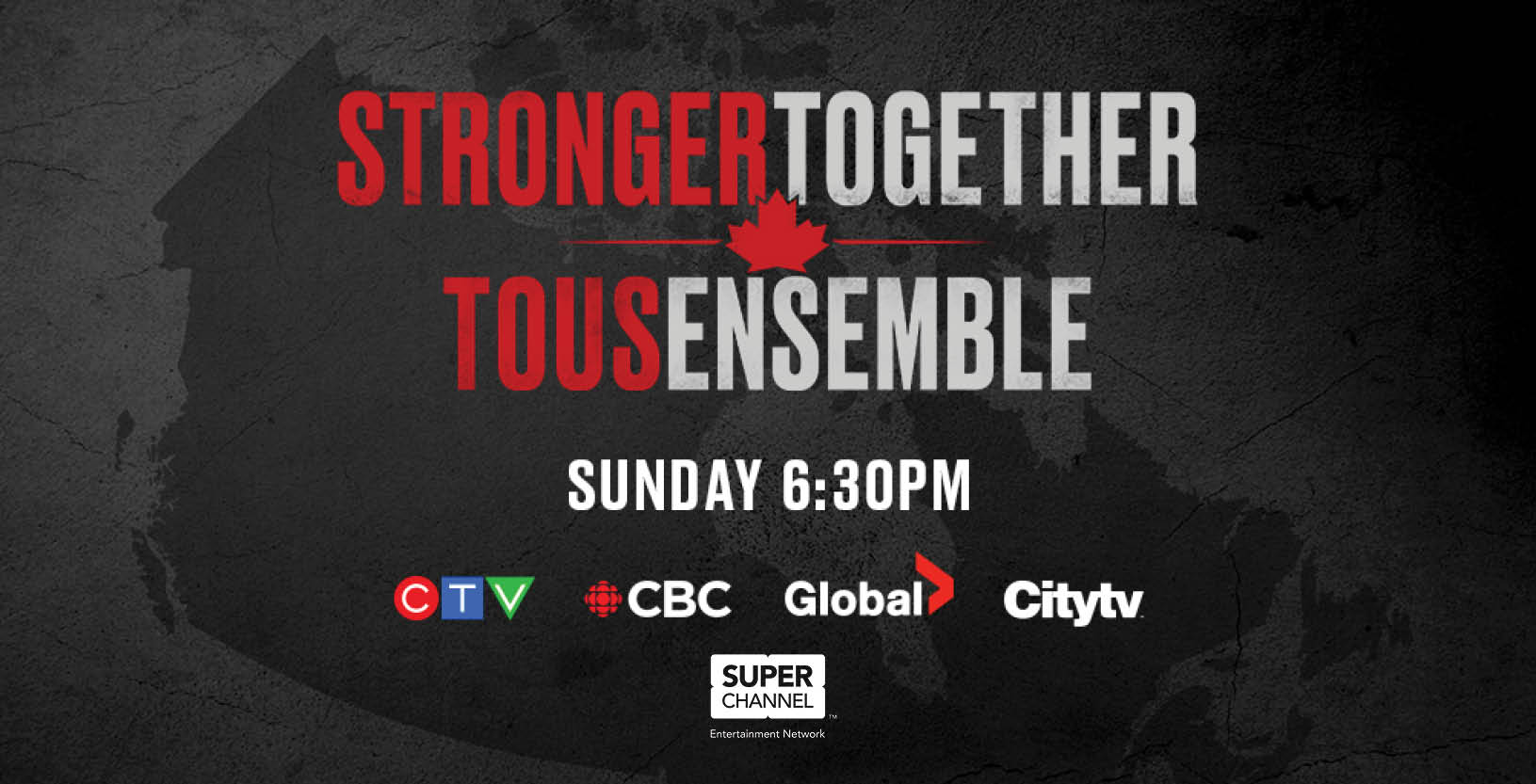 TORONTO (April 22, 2020) – After incredible response and interest, the previously announced all-Canadian special, STRONGER TOGETHER, TOUS ENSEMBLE, has been extended to a 90-minute broadcast now airing 30 minutes earlier at 6:30 p.m. across all markets / 7 p.m. NT on Sunday, April 26. The event, in support of frontline workers fighting the battle against COVID-19, and Food Banks Canada, has become the largest single-show broadcast in Canadian history, with 10 additional broadcasters joining Bell Media, CBC/Radio-Canada, Corus Entertainment, Groupe V Média, and Rogers Sports & Media to present the star-studded, commercial-free broadcast, now available on an unprecedented 120 platforms.

“We are grateful for the many calls and e-mails from iconic Canadians offering to help and be part of this historic broadcast, and can't wait to share more details tomorrow,” said Lindsay Cox, Senior Vice-President, Showrunner, and Executive Producer, Insight Productions. “We are also thankful to the growing list of broadcast partners who have been able to find time in their schedules to allow us to tell even more stories of the frontline workers and community heroes making a difference right now.”

Conceived and produced in an unprecedented collaboration between Insight Productions, Bell Media Studios, and CBC/Radio-Canada, STRONGER TOGETHER, TOUS ENSEMBLE is presented in part through the support of MADE | NOUS, the national, consumer-focused, industry-wide movement recognizing and celebrating creative Canadian talent.

Canadians who are able are invited to donate to Food Banks Canada in association with the broadcast to support local food banks from coast-to-coast-to-coast as they face the drastic impacts of COVID-19.

Featuring a mix of music, messages, and more, STRONGER TOGETHER, TOUS ENSEMBLE presents homegrown artists, activists, actors, and athletes sharing their stories of hope and inspiration in a national salute to frontline workers combatting COVID-19. Canadian talent are uniting to show everyone working on the front lines of this pandemic that we are all #StrongerTogether.

Broadcast Details
STRONGER TOGETHER, TOUS ENSEMBLE will air on at least 120 platforms, including live, simultaneous French translation on ICI ARTV, SériesPlus, VRAK, V, and Unis TV. The special can also be viewed on:

Food Banks Canada Viewers and listeners who are able are invited to support Food Banks Canada’s response to the COVID-19 pandemic. Food banks are concerned about the amount of food they have in stock as demand increases while food donations and volunteers decline rapidly. Funds raised as a result of STRONGER TOGETHER, TOUS ENSEMBLE will be used to source essential food and support items across the Canadian food bank network and support operational innovation, including creating alternative delivery systems to best serve people in need during COVID-19.

STRONGER TOGETHER, TOUS ENSEMBLE is a joint production of Bell Media Studios, the Canadian Broadcasting Corporation, and Insight Productions.

About Insight Productions
Insight Productions, known for its award-winning ratings juggernauts, is Canada’s most established content producer and an industry leader in the development, financing, and production of hit programming, both scripted and unscripted, as well as digital content. Insight Senior Vice President Lindsay Cox serves as Executive Producer along with Insight’s Chairman, CEO and Executive Producer, John Brunton, on STRONGER TOGETHER. Insight has a long history responding to world crises and collaborating on projects that help support relief efforts with such shows as MUSIC WITHOUT BORDERS, THE CONCERT FOR TSUNAMI RELIEF and YOUNG ARTISTS FOR HAITI. With thousands of hours of programming under its belt, the company has created some of the most dynamic and top-rated programs in the world including THE AMAZING RACE CANADA – the most watched Canadian show on record, ratings hit – BIG BROTHER CANADA, Canada’s national music award show - THE JUNO AWARDS, CANADA’S NEW YEAR’S EVE: COUNTDOWN which was the highest rated show on the CBC in both 2018 and 2019, TOP CHEF CANADA, INTERVENTION and original formats BATTLE OF THE BLADES, I DO, REDO & WALL OF CHEFS. Insight’s scripted programming includes award-winning READY OR NOT, FALCON BEACH, HATCHING, MATCHING & DISPATCHING, A CHRISTMAS FURY, BUT I’M CHRIS JERICHO! and THE JON DORE TELEVISION SHOW along with award-winning feature documentaries HOW TO CHANGE THE WORLD and GORDON LIGHTFOOT: IF YOU COULD READ MY MIND. In 2017, Insight produced THE TRAGICALLY HIP: A NATIONAL CELEBRATION, a live concert special watched by one in three Canadians. Insight Productions was founded in 1979 and has since created thousands of hours of ground-breaking content. For more information on Insight Productions, please visit www.insighttv.com or on Twitter @insightprod or Facebook www.facebook.com/InsightProductions.

About CBC/Radio-Canada
CBC/Radio-Canada is Canada’s national public broadcaster. Through our mandate to inform, enlighten and entertain, we play a central role in strengthening Canadian culture. As Canada’s trusted news source, we offer a uniquely Canadian perspective on news, current affairs and world affairs. Our distinctively homegrown entertainment programming draws audiences from across the country. Deeply rooted in communities, CBC/Radio-Canada offers diverse content in English, French and eight Indigenous languages. We also deliver content in Spanish, Arabic and Chinese, as well as both official languages, through Radio Canada International (RCI). We are leading the transformation to meet the needs of Canadians in a digital world.

About Food Banks Canada
Food Banks Canada provides national leadership to relieve hunger today and prevent hunger tomorrow in collaboration with the food bank network from coast-to-coast-to-coast. For 40 years, food banks have been dedicated to helping Canadians living with food insecurity. Over 3,000 food banks and community agencies come together to serve our most vulnerable neighbours who last year – made 1.1 million visits to these organizations in one month alone, according to our HungerCount report. Over the past 10 years, as a system, we have sourced and shared over 1.4 billion pounds of food and Food Banks Canada shared nearly $70 million in funding to help maximize collective impact and strengthen local capacity – while advocating for reducing the need for food banks. Our vision is clear: create a Canada where no one goes hungry. Visit www.foodbankscanada.ca to learn more.