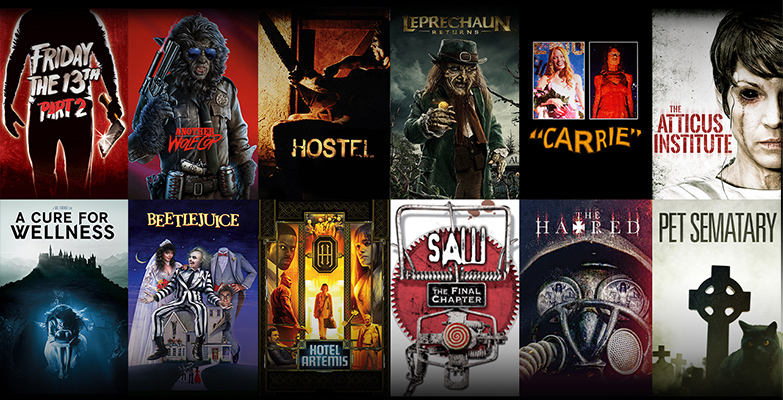 Thomas A. King (the Man, the Myth, the Legend)

Do you want to see something really scary? Welcome to the “Horrordome”, where you may find resurrected pets, humans, demons, ghouls, ghosts, goblins, unstoppable slashers, hybrids (I’m looking at you 1986 The Fly Remake and Splice) zombies, really fast zombies, telekinetic humans, mummies, The Devil, witches, aliens with nasty teeth, cannibals, and people who like to take out teeth without any painkillers and Gonzo the Great. Get ready for things that go bump in the night! There will be great grim ghoulish fun coming your way this October. I may have mentioned in my previous blog back in 2017 that I love horror films! I love all kinds and I love when they get them right and we have a lot to choose from on Super Channel’s FUSE and VAULT.

Horror fans will have much to cower, hide, jump, scream, laugh or be totally grossed out under your blanket over this October. There are many spooky films to choose on FUSE. We will have the premieres of Hell Fest, The Hoard, Scarecrows, Creep Nation, I’ll Take Your Dead, Deadsight and Once Upon a Time at Christmas. There’s also encore showings of 10 Cloverfield Lane, Darken, From a House on Willow Street, My Friend Dahmer, Down a Dark Hall, The Lullaby, Wait Till Helen Comes, Land of Smiles, Desecrated, The Atticus Institute, Isabelle, Another Wolfcop, Martyrs (US remake), Blood, Sweat & Terrors, Hellmington, No One Lives, Leprechaun Returns, The Hatred, Angelica, The Child Remains, A Cure for Wellness, Navy Seals vs. Zombies.

I’ll Take Your Dead is one of my personal favourites of this year. After losing his wife to cancer and his savings to keep her alive, a man is forced to survive by making dead bodies disappear for local criminals. When he discovers one day that one of the bodies is still alive, he must decide if letting her live will protect him and his young daughter (who allegedly sees the ghosts of the disposed bodies) from the criminals expecting her to be disposed of. The performances of Aidan Devine and Ava Preston enhance this crime/horror mix, making it out of the ordinary IMHO. Check it out on FUSE on Saturday October 19, 2019.

A Christmas Horror Story is an anthology of spooky Christmas themed stories with so much demented fun. In this film, a student documentary becomes a living nightmare, Santa deals with rabid Elves, a family takes on Krampus and one family finds their child suddenly different after being lost in the forest. All the stories tie together in this fun romp. I mean, how can you go wrong with William Shatner as a Radio DJ working on Christmas Eve? Check it out on Friday October 25 at 10:45pm following the crazy slasher/mystery premiere at 9pm (ET) of Once Upon a Time at Christmas. Crazy guy and crazy lady dress up as Santa and Mrs. Claus and go on a mysterious killing spree. A double bill I call “Once Upon a Very, very Dark Christmas”.

Vault’s list of horror titles in October should have you reaching for the light switch on a dark and stormy night. You want nasty & evil watch the premieres of Hostel I and II (October 20th and October 27th), you may never travel abroad again! There’s also the remake of Carrie from 2013, with a grandiose performance from Julianne Moore as Carrie’s mother (the best thing about the remake.) Plus, you get these sinister, spooky, scary, spine chilling, spine tingling flicks to scream by on Vault: Pontypool, Paranormal Activity, The Blair Witch Project, Frailty, The Amityville Horror (1979), 28 Days Later, 28 Weeks Later, The Colony, Frozen (not to be confused with the animated Disney film) The Tall Man (not to be confused with the character from Phantasm), plus the howlingly funny horror comedy Wolfcop. Check out the sequel Another Wolfcop on FUSE. Not to be outdone, but we have Paramount’s original 8 Friday the 13th movies with the never stop never stopping Jason Voorhees. Every Friday and Saturday night in October relive what I like to call “Crystal Lake Memories Parts 1 through 8”. Personal favourites of the Friday series are Parts 1-4 and 6 and 7 (Part Seven has the best makeup of Jason Voorhees ever! Nuff said!) If you just want to sit alone on Halloween and be scared all day, check out our Friday the 13th Massacre Marathon. I affectionately call it “Camp Blood Overflows and overflows…” It starts with the very first Friday the 13th at 7:15am followed by the premiere of Saw: The Final Chapter at 8pm.

Vault’s has 6 classic, creepy, chilling Stephen King film adaptations. We have the blood curdling classic of Carrie (1976) starring a gaggle of up and coming stars of the 1970’s. Sissy Spacek, Piper Laurie (nominated for Best Supporting Actress Oscar in 1976), Amy Irving, Nancy Allen, John Travolta, William Katt, and P.J. Soles star in this timeless tale of revenge and pig’s blood. Carrie returned in 2013 with its update for newer times. Don’t forget about The Dead Zone, Stephen King’s Thinner and Pet Sematary. The final adaptation is the not-so-scary, but totally funny and thrilling The Running Man from 1987 starring Arnold Schwarzenegger. Check out my double bill called Stephen King’s Fun Time Playhouse! The original Carrie (1976) followed by The Dead Zone on October 17, 2019.

Two adaptations from legendary Canadian director David Cronenberg are on Vault. 1983’s The Dead Zone (a man awakes from a coma and discovers he has psychic abilities and can see the future by touch). Even though Cronenberg and King are known sometimes as blood and guts horror, this film delivers great performances and thrills without gobs of gore. Don’t miss (if you’ve never seen it before) the now classic remake of The Fly (1986). A transporter mixes DNA of a fly and Jeff Goldblum and things do not go well. This one is flat out awesome, great Oscar winning makeup effects (from Chris Walas). Amazing performances by Goldblum, Geena Davis and John Getz. You may want to wait to watch long after dinner or supper. Not recommended for those with squeamish stomachs. (but oh... those effects... :)

On Monday October 21st, we have what I like to call Mummies & Cabins & Demons Oh My! A double dose of Bruce Campbell fun with the cult classics Bubba Ho-Tep, and the never to be topped original The Evil Dead. Even Stephen King called the Evil Dead movie at the time “The most ferociously original horror film of the year”. He ain’t wrong! It’s a true roller coaster of terror and horror. A circle of friends head to a cabin in the woods and accidentally release demons. Fun, gore and dismemberment ensue! You may never look at a pencil or trees in the same light! An all-time horror classic IMHO. In Bubba Ho-Tep, Bruce Campbell and Ossie Davis give fine performances as Elvis Presley and JFK in stuck in convalescent home, who must battle an evil Egyptian mummy who sucks out the souls of those stuck in the facility. Although bathed in the horror comedy film genres, the film is based on the short story from author Jon R. Lonsdale, and to me at least, it is a touching look at getting old and being forgotten in the world. If you have never seen it, or have even wondered about it, stop what you are doing and watch it immediately.

How about other worldly terror? October 28th is also known as, “In Space and on Earth no one can hear you scream.” It starts out with this (that’s me!) self- confessed Muppets fan with a cherished flick (but non horrific) called Muppets from Space, followed by the new modern classic Super 8. Then back to horror with the original chest burster Alien from 1979. Splice and a little- known independent film called Independence Day (1996).

Aliens not your cup of tea? Try this Hannibal Lecter triple bill on for size, which I call “Well, Clarice, have the lambs stopped screaming?” On October 30th start out with Manhunter (based on the novel Red Dragon by Thomas Harris), followed by the 1991 Oscar winning film The Silence of the Lambs and its digestible sequel Hannibal. Make sure to have some slightly chilled Chianti, maybe some fava beans for these intense heart stopping thrillers.

Last, but not least, we have both original theatrical Addams Family movies, The Addams Family and Addams Family Values on October 6th and October 13th. These absurd comedies are wonderfully dark and funny, which of course fits for Halloween. Tons of laughs, great set design and makeup. You also have amazing actors like Raul Julia, Anjelica Huston, Christina Ricci, and Christopher Lloyd doing impeccable impersonations of the Charles Addams comic strip. The Addams Family movies never get old; they endure year after year.

We are filled to the brim with bone chilling dread and shocks of terrifying horror! Can you survive the month? Can your heart take another jolt? Make sure the windows are closed. Make sure the doors are locked. Did you leave your keys in the car? Don’t fall on your keys or the killer may catch you. Will you be able to deal with the tricks or treats this Halloween? Do you want to see something really, scary? Unpleasant dreams everyone.